1971 was the year Latin Kings were on a mission to go out and kill people, for the possibility of getting that rank. Use people as stepping stones. The only known stories I know of is Lord Gino killed a Vice Lord and BK killed a Bishop, and they did that within 10 days of each other, and both became leaders. Lord Gino also put a gun to the Vice Lord𠏋 sister𠏋 head, and pulled the trigger, but had ran out of bullets (Verlinda Hamilton) and this was a reason why White Sal opposed Gino to become the leader for North side (White Sal was 1 of the main election leaders, he voted for BK). White Sal was also BK𠏋 section leader before BK became the big nation leader. I do know 1 of the main leaders involved for the election meetings was Cookie from Humboldt Park. 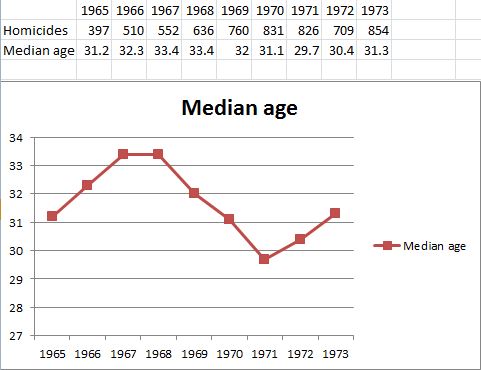 In this homicides map, Latin Kings were able to drop down the median city-wide homicide age a few years. 19 year-old BK killed a 16 year-old, and I don㦙 have the age of the VL 16 year-old Gino killed.

Then we know when the elections ended.. Lord Gino𠏋 nephew told me he became the leader a little before his 18th birthday, so pretty much August or July 1972. Lord Gino was in the county at the time, and BK in the IDOC. The decision to make them leaders, came from the streets. Can㦙 say I know any other situations like that in any other gangs. Pretty ironic because that tradition ended even with themselves. When BK was retiring, he didn㦙 pick someone that just went into prison, he picked someone that was about to come out of prison. And when that person became leader, Tino also didn㦙 pick the regional leader someone that just went into prison, but he picked someone that was also about to come out of prison (Fernando King). And I𠍿 thinking if the LKs went out to silently kill people and got away with it, then it could never be proven among themselves. So for the known stories, Gino and BK both did walk-on shootings in front of a large group, and the large group all testified against them.

I don't think any book talks about this yet.

-The MLD-founder was killed in 1972, but I never knew what month it happened in. If it was before July, then perhaps the elections was still taking effect, as he was also killed in front of a group. But the King who killed him was later killed for it, so that makes him X鏆 out the candidates list, if it happened soon enough.

-Feb. 1972, a group of 3 consisting of Milwaukee Kings and PR Stones killed 2 Latin Kings (that were 18 and 16), and that was a retaliation. Kings killed Tar Baby of the PR Stones earlier.

-The MLD-founder𠏋 cousin, was a Milwaukee King killed by Latin Kings in 1971.

-BK also killed a Bishop called Karate Joe, but never went to prison for it. Latin Kings had wanted to open up a section on 18th and Blue Island, and Bishops and Counts did not allow, and killed Kings that got in the way. BK then just walk down 18th and smoked Karate Joe.

-King Kong shot and killed someone coming out of a house on Pierce street, May 4, 1971 (unconfirmed if this has to do with the election).

The Latin King election meetings took place at the building on the northwest corner of Division and Spaulding (now demolished). 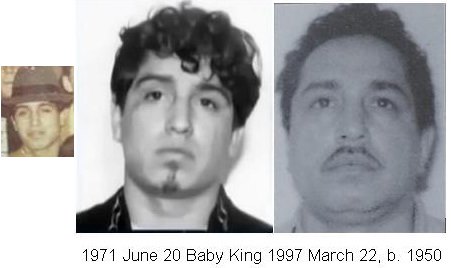 In 1971, 20 year-old BK was in love with a 16 year-old girl, they were romantically involved. But what was the problem. The problem was no girl is gonna wait 25 years for you. And so, I think over time she was settled with someone else. BK would never have to go to prison if he didn㦙 participate in the elections, and looks like they weren㦙 making leaders for those that didn㦙 do a known body, so BK lucked out on the love of his life, and he didn㦙 have kids with anyone else after. So when BK came out of prison in 1994, did he and her ever reconnect?

They only spoke on the phone.