I'm temporarily dumping everything here in this page, before working around to sort them to other pages later.

Maria del Carmen Bousada de Lara gave birth to twin sons at Sant Pau Hospital in Barcelona, Spain on December 29, 2006, at the age of 67, breakimg the previous record, of Adriana Iliescu, who gave birth to Eliza-Maria at age 66 on January 16, 2005, breaking the world record for the previous oldest mom, Satyabhama Mahapatra, an Indian woman who gave birth at age 65 on April 9, 2003...previously breaking the world record of the oldest mom, Arceli Keh, age 63 and 9 months on November 7, 1996, breaking the previous record set by Rosanna Della Corte of Canino, Italy, giving birth to a son on July 18, 1994, at 62.

The youngest mother whose history is authenticated is Lina Medina, who delivered a 6-pound boy by cesarean section in Lima, Peru in 1939, at an age of 5 years and 7 months. The child was raised as her brother and only discovered that Lina was his mother when he was 10.

Girls such as this suffer from a hormonal imbalance, or precocious puberty, which is characterized by premature secondary sex characteristic development. In a small percentage ovarian and uterine development appropriate for fertility also occurs, making pregnancy possible. Lina, for instance, began menstruating at age 3. 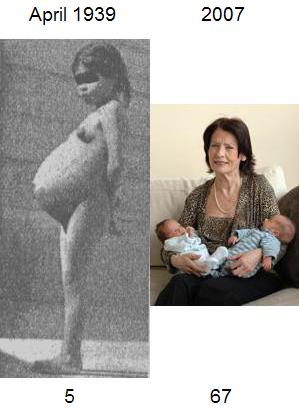 Sean Stewart, of Sharnbrook, England, became the father of a healthy 6 pound baby boy on January 20, 1998, at age 12. He was given the day off from school to be at the bedside of his teenage girlfriend and next-door neighbor Emma Webster when she gave birth. Described by Emma's parents as "mature-looking", the precocious youth first told them he was 14, but later confessed his real age when news of the pregnancy broke. Shocked at first, Sean vowed to stand by both his girlfriend and his child, saying, "I want to be there for the baby and to be part of it all." As for what the future holds for the young couple, Emma said she planned to continue her education and raise the child herself with the support of her parents.

This one may be unknown, but Robert Young knew of a circumstance of a man who fathered at age 93.

The youngest grandmother whose history is authenticated is Mum-Zi, a member of Chief Akkiri's harem on the island of Calabar, Nigeria, became a mother at 8 years and 4 months. Her daughter also delivered a child at age 8, making Mum-Zi a grandmother at age 17.

The youngest grandfather whose history is authenticated is Fale Wright, following the birth of a baby girl to his son, Stephen, and his girlfriend, both 14 years old, Dale Wright of Warwickshire, Britain, became the youngest known grandfather at age 29. Mr. Wright, who was also 14 when Stephen was born, was astonished when his son told him his girlfriend was expecting, but did all he could to be supportive. "I wish it hadn't happened," he told the press, "but I couldn't shout at Stephen too much because I'd done the same at his age." Asked what he thought about his father becoming a grandpa, Stephen remarked, "I think dad was more concerned about being a granddad than me having the baby. I've got to be careful about calling him granddad now he doesn't like it too much."

When I can expand this table, I have plans on putting this on it's own page.

Adriana Iliescu, former world record, at 67, on January 16, 2006, with her 1-year-old daughter, Eliza-Maria, in their apartment in Bucharest, Romania.